Allowing the best music gear to be accessible to more people

There are gearheads of all types, but there is only one site that fulfills both their musical passion and their gear obsession—Reverb. Reverb saw the opportunity to fill a glaring hole in the traditional resell sites, like Craigslist and eBay, which weren’t adequately serving musicians.

They aggregated the splintered vintage music market by combining resell sites, vintage road shows, and specialty stories into one, simple online platform. They connect third-party sellers with customers from all over the globe to create the world’s largest online music gear marketplace. In just five years, Reverb has become more than just a destination to find the best prices on guitars, amps, drums, and more—it’s also a growing community of over 10 million music nerds and has set the standard on pricing what they’re buying and selling.

“Musicians are hustling,” said Dan Abel, Reverb’s Director of Marketing. “It’s a passion, and we don’t want a passion to become a stressor in life.”

Transparency and 0% APR sold Reverb’s customer base on Affirm

Financing isn’t new in the music industry. In fact, it’s a standard that Reverb knew its customers would welcome when a guitar or drum set can easily cost thousands of dollars. But they also wanted to offer a financing option that aligned with their values and, especially, those of their customers. Reverb decided to partner with Affirm because of their commitment to reinventing consumer credit through honesty and transparency. Unlike most financing options, Affirm doesn’t charge late fees, hidden fees, or compounding interest. For Reverb, it isn’t about getting customers to buy the most expensive guitar, but instead allowing the best music gear to be accessible to more people.

With Affirm, Reverb customers can buy the gear they want today and responsibly pay for it over time. For Reverb, that meant significant impacts to their business. The average order value with Affirm is double that of other payment methods. More significantly, the lift is across all of their categories—guitars, drums, amps, and more. Their loan volume has also doubled year-over-year.

Committed to their mission of making the world a more musical place, Reverb started offering 0% APR financing on a promotional basis as an alternative to sales and discounts. These campaigns pushed 0% APR in advertisements and emails with marketing similar to a traditional sale. The results of the limited promotion were so impressive that they decided to offer 0% APR indefinitely, and tested its impact by temporarily suspending marketing on the offer

“We wanted to see how it would organically grow and it proved itself, by itself, without any marketing,” Abel said. “People still used it, so we decided to run 0% [APR] in perpetuity.”

Since then, the number of Affirm customers who are choosing 0% APR grew 25 percent. Reverb has continued to market Affirm’s 0% APR offering to great effect by weaving it throughout all their campaigns, including emails, social media ads, and digital ads. It reduces the sticker shock of their items, which are inherently expensive, and eases the purchasing decision for customers.

“Affirm really got it. Now when you join Reverb it’s part of the welcome process,” Abel said. “[Affirm doesn’t] see [Reverb] as just another site selling tchotchkes. They understood how much we cared about our mission.”

The 0% APR option wasn’t just a draw for customers. Reverb’s third-party sellers were also eager to join the program. 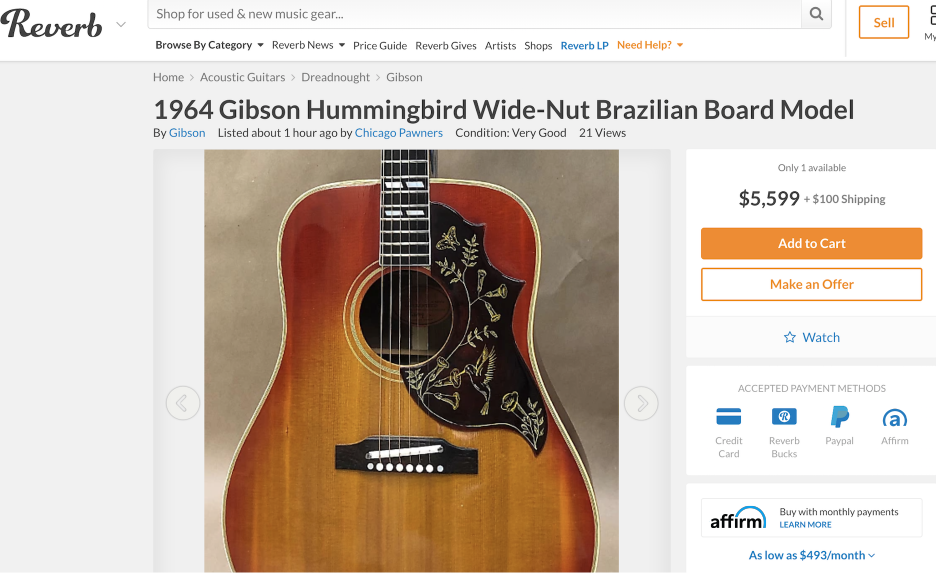 “We have had [sellers] double down on Reverb when they found out we had financing,” Abel said. “It’s been a huge asset in recruiting people to sell or sell more.”

Many of their sellers are established mom and pop stores that don’t have the national or global reach of their larger competitors. Even in their brick-and-mortar locations, many are unable to provide their ardent supporters with a financing option. Now, on Reverb’s platform, they can offer it with Affirm.

And it has been paying off for them. 0% APR has become so popular Reverb even introduced it as a filter into their search function, alongside other buying options, to help match customers with sellers offering it. The idea was for 0% APR to be a catalyst and a resource to bring a higher volume of sales to their sellers. Reverb began offering it to only 25 sellers, but it was so successful compared to the non-Affirm rates, that they soon opened it up to hundreds.

“Affirm kept its promise to be a healthy partner for the thousands of sellers on our platform,” Abel said. “And they are helping people responsibly get their hands on the gear of their dreams.”