Goal: Customers wanted a simple way to pay over time for their purchases.

Crown & Caliber is one of the leading online marketplaces for buyers and sellers of certified pre-owned luxury watches. It’s a huge market, growing about $7 billion annually, according to former private equity investor and Crown & Caliber CEO, Hamilton Powell.

The company itself has grown from a staff of two to 44 in less than three years, as a reflection of the high demand in the market.“We’re doing to watches what has already been done to the car space,” said Powell, who estimates there’s $100 billion in pre-owned luxury watches in people’s drawers across America.

“We ensure a safe and highly profitable return to the seller, and the same for buyers at 50 percent to 90 percent off the retail price.”

Every timepiece on the Crown & Caliber website goes through a rigorous authentication and servicing process to make sellers’ watches like new. “Then we set a fair price based on hard data,” said Powell. “We basically let the market determine the value

Buyers can pay with traditional credit products, but inquiries about paying in installments had been growing. “It became clear that paying over time was pretty important to making the buying process easier,” said Powell. Crown & Caliber reviewed several options. “We looked at traditional banks and the like, but they just weren’t very far up the learning curve from an e-commerce standpoint.” 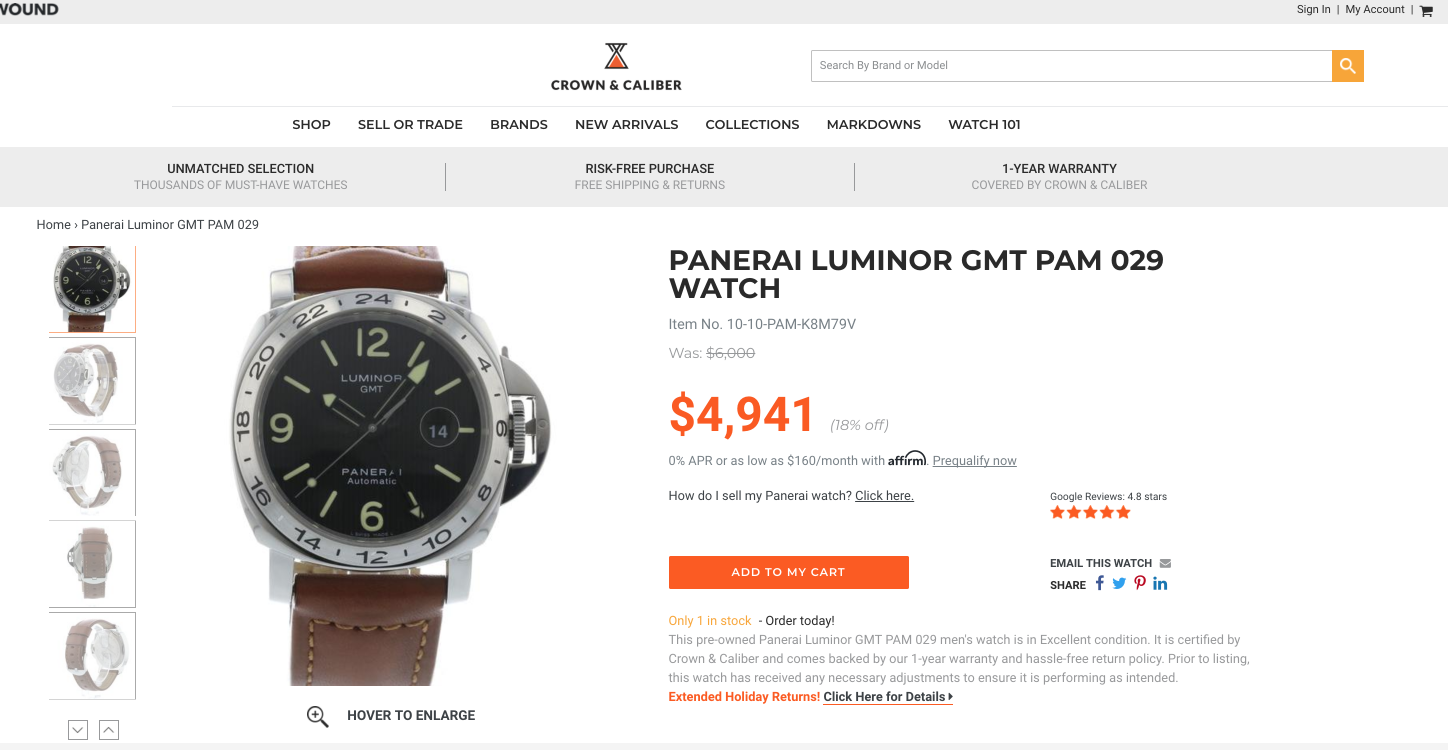 Ultimately, Crown & Caliber decided to offer its customers Affirm at checkout because of its seamless integration, its proven performance of driving revenue for other e-commerce businesses, and most importantly, its ease of use among shoppers. “Going with Affirm was a classic case of listening to customers,” said Powell. Just one month in, it was clear that going with Affirm was paying off. Conversion rates jumped 74%, average order values increased by 74%, and overall revenue was up 170%. And multi-orders – purchases of more than one watch at a time – were up almost 300%.

“With Affirm, customers are more comfortable buying one watch for themselves and one for their significant other,” said Powell. “Or, ‘I’m buying a dress watch, but always wanted that sports watch too.”

Additionally, over the Black Friday/Cyber Monday weekend, Crown & Caliber offered customers the option to pay over time with no interest cost using Affirm. “Customers clearly appreciated it – it was really well received,” said Powell. “I mean, why buy with cash when you can get 0% APR?”

Crown & Caliber saw their sales spike as a result of the 0% promotion. This is a great alternative to offering a price discount, which can oftentimes be more expensive and dilute the brand. No-interest payments provides the same level of customer satisfaction as a pricing promotion. “This is something we will likely offer again in the future,” Powell said.